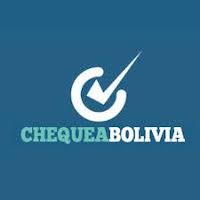 A fundamental pillar of the democratic system is that there is freedom of expression and dissemination, and that citizens are duly informed to make correct decisions in their daily lives.

With the arrival of social networks, at the same time that an extraordinary space for intercommunication has been opened, specific interests have emerged to influence the people who participate in them by spreading false news (fake news) to misinform. Even more so in polarized political settings.

Hence, as a contribution to the democratic system, the ChequeaBolivia initiative has been organized whose objective is to detect false news that is disseminated on Facebook, Twitter and WhatsApp in and about the country and to disseminate the corresponding rectification after carrying out a rigorous verification of sources.

In other words, it is intended to bring together the work on social networks that is carried out in the academic, technological and journalistic fields in a space of service to society.

In addition, it seeks to motivate people and entities to use this service when they doubt any news that circulates through the social networks for its verification and rectification when appropriate. In this way, with Chequea Bolivia you will have an instrument that allows you to avoid being confused by false news, whether it comes from any political, economic, cultural, social or religious space.