EMBs face a potent mix of pressures, including: heightened public perception of disinformation as a threat to elections; pressure on them to be seen actively countering disinformation; differing levels of understanding of the nature of the problem among EMBs; and the time-sensitive nature of effective responses. Given this context, an EMB’s reaction in the moment might be informed by a perception of immediate need rather than reflecting a larger strategy best suited to promoting electoral integrity. Crisis Communication planning can create a roadmap for EMBs to respond to electoral disinformation during sensitive stages of the electoral process. In instances where an EMB has historically relied on ad hoc communication strategies during a crisis, programmatic investment can help EMBs formalize a crisis communication strategy to improve the speed and accuracy with which they are able to respond to mis- and disinformation.

One tactic of disinformation campaigns – whether led by foreign or domestic actors – can be the deliberate attempt to create a crisis mentality in order to sow distrust or confusion and undermine faith in democratic institutions and the electoral process. Not all misinformation or disinformation is indicative of a crisis, and determining the timing and form of an EMB’s response, and in which circumstances it will make a response, is part of the preparatory work that can help an EMB focus resources and decision making when needed.

“Know the way you will react if a problem presents itself, if fake news comes out. The EMB can’t just receive hits.” — Dr. Lorenzo Córdova Vianello, Councilor President of the National Electoral Institute of Mexico

2.1 Don’t create your own crisis

Due to the added attention placed on digital disinformation, EMBs may feel compelled to respond to any and all items of election-specific misinformation or disinformation that they encounter. Crisis communication planning can help establish criteria for what circumstances will warrant a response from the EMB, and in what form. Highlighting the existence of a piece of false or misleading content for the purposes of rebutting it may not always be the best course. In explaining their thinking behind whether to debunk or ignore such content, nonprofit First Draft writes that, “[i]f certain stories, rumours or visual content, however problematic, were not gaining traction, a decision was made not to provide additional oxygen to that information. The media needs to consider that publishing debunks can cause more harm than good, especially as agents behind disinformation campaigns see media amplification as a key technique for success.” This same consideration is important for EMBs. Crisis communication planning allows the time and space for EMBs to develop best practices for how they will provide clarifications or rebuttals so that they do not inadvertently exacerbate the problem. Good practice on how to provide effective fact checks continues to evolve, a topic that is explored further in the guidebook subcategory on fact checking.

2.2 Create clarity on lines of communication and authority

An integral part of crisis communication planning is ensuring that information flows and hierarchies are delineated in advance. This can be particularly relevant in instances when the EMB is called upon to confirm facts or issue clarifying statements and counter-narratives quickly. A clear and direct communication protocol to coordinate responses can be essential to restoring public confidence, as vague or conflicting clarifications can exacerbate the problem.  It is imperative to have clarity on who has the right to issue statements and through what means those statements will be made – not only within the EMB, but in consultation with other state agencies that may be called upon to clarify. Failure to do this can add fuel to the very mis- and disinformation a public statement can be intended to quell. For example, in response to alleged out-of-country voting fraud taking place in Malaysia, the two different Indonesian electoral bodies initially issued contradictory clarifying statements (one claiming that the allegation was entirely fabricated, and the other stating that the issue was real, but minor and had already been detected) – which created more confusion and potentially undermined the credibility of both bodies. Having a clear and expeditious protocol in place for how the two agencies would coordinate messaging could have helped avert this misstep.

Crisis communication protocols should strike a balance between expedience and internal checks for accuracy. An EMB should avoid having communications choke points whereby requests for clarification cannot be responded to with speed. In the case of Indonesia, third-party fact-checking civil society organization MAFINDO would frequently call on the KPU and Bawaslu to issue a rebuttal of false or misleading information in circulation, but the CSO reported that response times varied significantly, at times taking several days to get a response, if one was received at all. Because the speed with which a false rumor is rebutted or removed once it has started to gain traction has a significant impact on the ultimate reach of that information, for cases where there is a clear-cut answer to be given, the right individuals should be given the power to clarify.

Crisis communication planning can also help to establish institutional guidelines on balancing communication priorities with other electoral priorities. “While it can be important for the public to see leaders pitching in during a crisis response, there is a limit.”1 For example, Indonesian electoral authorities were very active in the investigation of cases of viral misinformation and disinformation in the run up to 2019 Elections. In the case of a rumor that cargo ships full of pre-voted ballots had arrived in Jakarta, the commissioners themselves mobilized to go to the port late in the evening on the day the rumor gained traction in order to investigate and issue a public statement. Similarly, a few days before the election, commissioners were deployed to Malaysia on short notice to rebut claims that fraudulent out-of-country voting was taking place.  For a severe case in which a false claim has the potential to derail the election, this response was transparent and visible, but a careful calculation should be made in terms of the best investment of time of EMB commissioners and staff, particularly in close proximity to elections when there are competing demands.

2.4 Coordination with Other State Entities

The EMB may be the lead agency in the crisis response, or it may be one member of a network. Misinformation and disinformation are rarely siloed and clear-cut, and will often include aspects that are within an EMBs purview to rebut, such as false or misleading information directly related to the electoral process, in combination with other issues upon which another government agency might be better positioned to comment, such as public health concerns or rumors of violence on Election Day. The subcategory addressing EMB Coordination with Other State Entities provides additional considerations on this topic.

Crisis communication planning must also include the post-electoral period. While an EMB may be active during the campaign period and on Election Day in monitoring and responding to problematic content, the period immediately following Election Day is one of the most at-risk periods for false and misleading information. Misinformation and disinformation that emerge during this period can have implications for public acceptance of the results or post-electoral violence if, for example, narratives of fraud or malpractice in polling, counting or results transmission gain popular traction in ways that leave citizens feeling disenfranchised. An interlocutor involved in media monitoring in South Africa notes that bad actors may modify their behavior for the better during campaign periods when they are aware of enhanced media monitoring and enforcement efforts, but observed that in South Africa “vile” content ramped up as soon as enhanced monitoring efforts ended.

The immediate post-electoral period can be a particularly strenuous period for EMBs as polls close and results are counted, aggregated and certified. Furthermore, the EMB is likely to be called on to resolve post-election complaints and they may also be a party in electoral cases that go to the courts. The coinciding of this exceptionally busy period for the EMB with a window of time that is particularly ripe for misinformation and disinformation means that a clear plan for communication protocol during the post-electoral period is essential, including clarity on communication with and shared responsibilities among state entities. Indonesian electoral authorities experienced this first hand following 2019 elections when rumors of electoral fraud led to protests that resulted in the deaths of 9 people and the restriction of social media access by government authorities in an attempt to stem the spread of misinformation and unrest. In the run up to Election Day, Bawaslu had been playing a leading role in coordinating responses to electoral disinformation and flagging problematic content for removal by the social media platforms. However, strained capacity in the days following the election forced them to step back from this role with the expectation that other government agencies would be able to step in. Crisis communication planning can help facilitate a smooth transition of responsibility from the EMB to other agencies in times where that is appropriate. A plan can help determine in advance in what way and at what point responsibilities might shift – both public communication responsibilities as well as communication with the social media platforms.

In anticipating how they will counter electoral misinformation and disinformation, EMBs should consider who are the effective messengers they can call on for rapid amplification of crisis communications that can credibly reach the audiences that are at greatest risk: 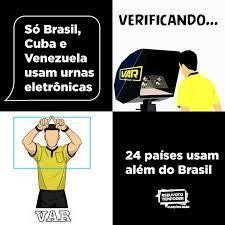 The Brazilian football club partnership disseminated content that used sports analogies, including this example referring to the VAR football verification system. In this instance, the content seeks to build confidence in election integrity and counter rumors of security flaws in Brazil’s electronic voting machines by noting the widespread use of similar machines in other countries.

Proactively identifying the right messengers can be a key preparatory step that allows an EMB to disseminate factual information most effectively under pressure. Preparing these networks to disseminate information to their communities in times of information crisis can be an essential way to ensure that an EMB’s message is amplified by credible sources in periods when a flood of information might drown out authoritative actors speaking from their own, more limited, platforms. For example, ahead of 2020 local elections, the Brazilian Superior Electoral Court (TSE), partnered with one of the country’s most popular soccer clubs to counter fake news.

In 2018, the office of the Prime Minister of Finland created an initiative to work with social media influencers to disseminate credible information in a crisis scenario. The network of 1,500 influencers that was established through that initiative was first activated to disseminate credible health information during the COVID-19 pandemic. Working with social media influencers enabled the government to reach audiences that are not consumers of mainstream media. For example, a video of an influential YouTube personality interviewing a government minister and health experts received more than 100,000 views within two days. A similar model could be employed by an EMB, for example, engaging social media influencers in advance of an election to sign a peace pledge that committed them to disseminating credible information and promoting peace on and directly after Election Day in a country where electoral violence is a concern.

To print/download all of the sections of this topic in the form of the single pdf please go to the page below and then use the PDF Exporter: