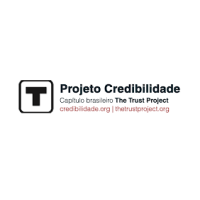 The Trust Project develops transparency standards that help people assess the quality and credibility of journalism. These standards are adopted by news outlets through an international consortium led by award-winning journalist Sally Lehrman.

In Brazil, the Credibility Project is carried out through a partnership between the Institute for the Development of Journalism (Projor) and the Graduate Program in Media and Technology at the Universidade Estadual Paulista (Unesp), under the coordination of journalists Francisco Rolfsen Belda , president of Projor and professor at Unesp, and Angela Pimenta, director of operations at Projor.

The project has two main objectives: to reflect on the fragmentation of the news narrative in the digital environment and to develop tools and techniques to identify and promote reliable and quality journalism on the internet, distinguishing it from noise.

The credibility indicator system is a series of standardized statements on the ethical and conduct principles followed by news organizations. They include polling and editing protocols and the professional background of journalists behind the news.

Leaders from different news organizations from different countries collaborated to create the indicator system, based on interviews conducted over two years with users in the USA and Europe.